On the Magic in Knowing the Stories Behind a Place 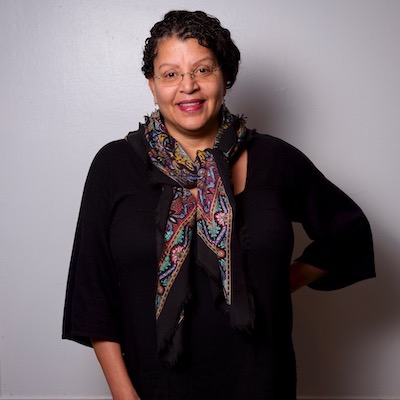 Karen Taborn (she/her) is a musician, an ethnomusicologist, a <a href="http://karentabornwalkingharlem.wordpress.com">Harlem historian</a>, a social and cultural activist, a meditator and a New Thought spiritual practitioner. She is the author of <a href="https://www.indiebound.org/book/9780813594576">Walking Harlem: The Ultimate Guide to the Cultural Capital of Black America</a>.

So to start, I would love to hear about where you live and how you got there.

I'm in West Harlem, near Riverside Park and west of City College. I moved here in the early 1980s when we were going through a very serious crack cocaine epidemic in New York City. And it hit this area, as well as Washington Heights right above me, very hard. So I moved into a crisis. And really, I think I stayed here because well, I couldn't afford to move anywhere else. I was an undergrad; I had absolutely no ways of surviving. And the rents were dirt cheap back then, if you got certain places. And I was a musician, so I said, I'll make this work.

Where were you in college and what were you studying at the time?

I was right up the street at City College. A block away from where I was living and remain today. That was another reason why I stayed, because I had started at City College. And I was in their jazz program, studying with some great jazz musicians like Ron Carter and singers like Sheila Jordan. That's really what brought me here to New York City.

Wow, I can imagine that was a very formative time, living in Harlem while studying and being steeped in jazz.

That's what drew me here. New York has such a strong history in jazz. Even though I was a very green, very naive, young lady... I was also very gutsy. And when I got something in my head, I was determined. So I just shoved past my fear, and said, you know, what won't kill me will make me stronger.

What are some of the communities you’ve felt most part of in this neighborhood and in NYC generally?

I was very active in the jazz community from the time that I got to New York City in the early 1980s until the time when I sort of stepped back around 1998. I was always going to jazz clubs and jam sessions or open mics, always. And then, really pursuing my own gigs and stuff in New York in the 1990s. But that was mostly in downtown New York and the Upper Westside. There weren't a lot of gigs up in Harlem.

I would say that in terms of this neighborhood, there's a couple of places that I really appreciate. The Schomburg Center has been here all along, since the 1920s when it was the 135th Street branch of the New York Public Library. And it's just been a great resource; they have great talks there that are usually free. I know everybody in the bookstore because I launched my book [Walking Harlem] at the Schomburg Center. It was an amazing day. Right on the ceramic tile, in the lobby, is an art installation by Houston Conwill called Rivers, which is based on a Langston Hughes poem. It reads: “My soul has grown deep like the rivers.” And underneath that lobby floor are the ashes of Langston Hughes, so I felt like... wow, I am being approved of by the ancestors!

What a blessing and christening for your book!

Yeah, that was about two and a half years ago now.

You know, right around that time, I had just moved back to NYC, and I started going to the Morningside Quaker meetings at Riverside Church where we met. I remember you making the announcement about your book coming out, and I picked up a copy to use as a tool to get to know my new neighborhood. So I thank you for that. I want to know what initiated that project for you?

Oh, well, it's another blessing of mine to have done that book, which was a labor of love. It was just one of the best things I've done in my life for sure.

Well, I really completed the book in two periods. First, it was in the early 90s when I was working on a masters degree in jazz. I knew somebody who was working on a project called the Strivers Center Project.  It included people from the Harlem Chamber of Commerce and different public officials and professionals. They brought me in to do research on the [Harlem] neighborhood. I was ecstatic. I mean, I'd always wanted to do it. But I was literally living minimum wage, just surviving. And this gave me a little bit of money so that I could do what I wanted to do, because everybody's always heard that Harlem was a mecca for African American people in the 1920s and the 1930s. So I dove in [to the research] with love, as I do when I get the opportunity to do something that really hits me in the heart. And I read and read and came up with a paper for them called What Made Harlem Famous. And we -- me and my mother -- self-published this little pamphlet. Then, right after that, I got my first adjunct teaching position at The New School teaching Harlem history. So that was another really high point in my life. I did that for a few years and then I did a few workshops on the history around the neighborhood.

But then my life moved on and I focused on my singing. In 2000, I went back to school and got another masters degree in ethnomusicology at Hunter [College]. And that took me into a particular study that I did for a while, about five years. When that was done, I came back to New York City and I taught at York College for a few years but when that ended, there was this open space. I thought, what am I going to do with this open space? And I said, I've always wanted to flush that paper out and make it a book. I ended up taking a lot of photographs, and then researching the other photographs that I used in the book. And I wanted to flush out stories on individuals and movements and various other developments that happened [in Harlem]. And so I took the time to do that, and then I searched for a publisher. And then I got my publisher, Rutgers University Press, and the rest is history.

Truly a labor of love. One of the things I love so much about the book is that it has the political and cultural pieces of Harlem’s history, but it also has the walking tours. So you can really, physically experience the neighborhood as you’re learning the history. I thought that was something so unique about your book. Why do you think a love of our neighborhood, of physical place, is important?

When you know the history in a place, it becomes more than merely a place. It can become magical. For me, when I studied the history [of Harlem], that magic came alive just walking down the street. When I walk down to the cross street between 135th and Seventh Avenue, I’m thinking about Zora Neale Hurston in the 1920s, studying at Columbia with the founder of anthropology Franz Boas. [At the time,] everybody in that field was affected by the pseudoscience called anthropometry. It was a problematic science that was trying to identify separate races. It was kind of a predecessor of eugenics. Boas had to deal with this science in order to make his arguments, even when he believed they weren't true. So he sent Zora Neale Hurston out to 135th and Seventh Avenue to measure head sizes, because people were measuring all kinds of body parts [as part of anthropometric study]. They were trying to establish supposed racial distinctions between Blacks and whites! So every time I walk on that cross street right there, that's one of the things that that place means to me. And it brings me joy -- because knowing Zora and the sense of humor that she had, she must have been cracking up the whole time. And she probably knew everybody on the street -- this was a major cross street in Harlem. Every famous Black American was crossing that street -- you never knew who you were going to see up there. And there she was, measuring people's heads! We should have a sign: “This is where Zora measured heads." I say that because when you know the stories behind the places of a community, they can come alive to you. When you know what happened in a place, it becomes more than merely a place, it can become magical. And there's so many places in this neighborhood that I walk past knowing who lived here and who they were and why they were important. Really my heroes were here.

You’ve been a part of this community in Harlem for decades and through many transformations. In your view, what are some ways that we build strong communities?

Yeah, I mean, I would say definitely support the institutions that feed you back. So for me, I mentioned the Schomburg, which I'm a member of, actually. And, also our local bookstore up in Harlem, Sisters Uptown Bookstore. Are you familiar with it? It's on Sugar Hill. It's a very small, very modest venue, but it's much more than a bookstore. The proprietors have cultural events on a regular basis -- poetry readings, book signings, music nights, meditation nights. They have so many events that create community for us.

Support the institutions that support you, just like you would support the friends that would support you. But Sisters [Uptown Bookstore] is really important because it is a real community. It's like a community center as well as a bookstore. It nurtures so many people on so many different levels. And it is ours!

Questions for Reflection: Have you ever walked through your neighborhood and thought about all the past lives it’s held? How might you learn more about the histories and stories of your street or block?

The best way to keep up the Place/Love Project, is to sign up for our mailing list by clicking here! Thank you as always for reading.