On Imploring the City for Better 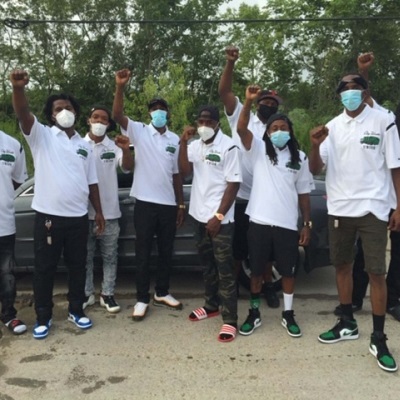 <em>Day is a representative of the City Waste Union, a group of sanitation workers in New Orleans that are currently on strike and seeking better pay and working conditions, including proper PPE.</em>

So I’d love to start by talking a little bit about the strike in general: what y’all are fighting for, what you hope to achieve?

Of course. So let me first tell you who I am. My name is Daytrian and I am the niece of a sanitation worker - his name is Jonathan. He and I grew up literally right next door to one another. My grandmother is his mom, so he and my mom are sister and brother. But he’s actually eighteen years younger than my mom, so we’re seven years apart. We grew up more like brother and sister than we did uncle and niece. So we’re super close. We talk every day.

They had been complaining for a very long time about the process of Metro [Service Group, the waste disposal company], and the things that they were experiencing on the garbage truck. One day, May 5th, they asked for better pay and PPE. The coronavirus really sparked those requests because they were being more exposed to more hazardous material. The media was out there at the time and the media was asking, “How are you responding to COVID? What’s happening?”, things like that. And it just so happened the same day the media was there was the same day that they were intending to begin striking. PeopleReady, who is a subcontractor of Metro, said: “Well, if you go over there and talk to the media, and if you don’t get on the truck now, then don’t worry about coming back to work. You’re fired.” And the guys said, “Okay, that’s no problem.” And they took off their vests and they went and talked to the media and they took their firing.

So from about May 6th to the 11th they were no longer employees of PeopleReady or Metro. And then there was a bit of confusion with regard to who they actually work for - do they work for Metro or do they work for PeopleReady? After everything kind of came together on the 11th, PeopleReady came out and said: “Oh, nevermind. We were just kidding. We’re not gonna fire you anymore. You can come back to work at the Metro contract or any other contract that you like, because we understand that you have a right to strike now.” So they gave them that paperwork. And the guys took the paperwork but said: “Are the conditions going to change? Are you gonna do anything differently?” And [PeopleReady] said: “You can get back on the truck. I can’t make any promises, but you can get back on the truck.” And at that time we just said: “They’re not getting back on the truck until Metro has the conversation that needs to be had here.”

We were on the Oliver Thomas Show the next morning, on WBOK, and then we continued to strike. Probably about a week after that, on the 18th, Jason Williams, the City Council President, said: “I’m gonna try to coordinate this meeting between Metro and you all.” He was going to try to broker the meeting, which we agreed to. And probably about 45 minutes before the meeting I got a phone call from Jason Williams’ office, and they were informing me that they had spoken to Metro’s spokesperson and their attorneys, and Metro had made the decision not to join us because they were afraid of the legal liabilities and how it would make them look. I think they also found out about the charges that were filed against them by the National Labor Relations Board. So we never got to talk to Metro. We only spoke to Jason Williams, his Chief of Staff, a couple other City Council members, and we spoke to the NAACP rep for the city of New Orleans. And after speaking with them, I think they understood better the plight of these guys, and they understood that this was not just a complaint of ignorant men. They understood that it was so much bigger than that. I mean, we’re talking about egregious acts from Metro. Something like: there’s sixty men that are on your yard at three o’clock in the morning and if any one of them has to take a shit then they have to wait, because there's only one port-a-potty. Something like: if it’s raining outside and the weather conditions are poor, then those guys just have to wait out in the rain until the driver decides that the weather is good enough for them to drive in. So they have to do the whole route soaking wet. When these things happen, it just becomes such an issue of inhumane treatment. It’s like, not only do they not make enough money, but now you treat them like dogs. So how do we deal with that? How do we say that’s not what should happen?

With Metro not being willing to meet, we just continue to strike. We’re now in our fifth week of strike. Now in their fifth week without receiving pay from Metro, but they are receiving pay from the strike fund that was created. So we’re working on those things. We started an Instagram, we started a Facebook page, so we update things there. A lot has happened in the last five weeks. We are also in conversation with other unions and even looking at the possibility of forming our own union and seeing what would be the best benefit not only for the workers at Metro but for sanitation workers in the city overall, or even in the state. That’s pretty much where we are now, to bring you up-to-date.

I think it’s a wake-up call for a lot of people, because what you said is true. You know, even I did it. I go to bed Monday night, and right before I go to bed I put my trash out on the curb. Tuesday morning, I watch the guys pick up my trash, they put my trash can back, I go downstairs, I put my trash can back on the side of the house. And it’s something that just happens so monotonously that I don’t even consider the fact that there are people who are literally hanging off the side of the trucks, picking up my trash can, putting it back, then they have to go to the next house. How many neighborhoods have they been in today? And how hot is it outside? And have they had water? Did they eat today? Was there time for a break? Did they have to go to the landfill today? So many things go into it that as a citizen you just don’t think about. And it’s not like you’re trying to ignore them. No one ever truly digs into: if you flip a light switch in your house, how does the power turn on? So many different things that go into that.

So we started saying: look at how they’re treating us. Especially in a time where there’s a pandemic, and there’s no way of knowing how this pandemic is truly being transmitted. First they say you should wear a mask because if you sneeze, it stays in the air for three hours. And it’s now attaching itself to plastic and it’s sticking in clothes and you shouldn’t touch anything. But then when you think about your garbage and the things that you dispose of, there’s never the true consideration that there’s another living human being who is gonna go and touch this shit and have to put it somewhere else. It just never happens. We had one comment on Facebook today where I just had to tell a guy: you sound crazy, get off this post. Because he was like, this job requires no skill whatsoever. And I just have to ask him: Have you ever picked up your trash can and dumped it in the back of a garbage truck? That requires skill. You have to be skilled to do that. And I can tell you, my uncle Jonathan is someone who weighs 150 pounds soaking wet. He and his identical twin used to be garbage men. A lot of these guys who work on these trucks are just normal average joes, but 98% of them are Black. So do we disregard them because of that?

I think that there’s sometimes among some people a perception of strikes and other actions like that as simply disruptive. How would you respond? Or what are the parts of striking and actions like this that actually build and strengthen community?

I think I would have a question to combat that: Have you ever gotten anything in your life without disruption? Change is constant. People go through growth spurts, and you have growing pains. That’s a disruption to your life. How can we truly attain the growth that’s necessary without the disruption? Especially for Black and Brown people. How can we truly show that what we need is better without disrupting this process of less than? How long will you stay in the 99% when there’s a 1% out there that are truly profiting from the 99? And then at what point do we say, I don’t just want to be the 99 anymore? How do we change those things? I don’t think that people should destroy things. I don’t believe in destruction, and I don’t think there needs to be anarchy for a resolution to a problem. But I do believe that we do have to disrupt the system that is a cycle of consistent poverty. We have to disrupt that. Because without the disruption, it will just continue to be a cycle and things will never change.

One last thing: how can folks support y’all?

People can support us by coming out to the strike line. This week, because of weather conditions, the road to get to Metro is underwater - I know, right? That even speaks more to the working conditions. But we are on the parking lot of the Winn Dixie on Chef Menteur Highway [in New Orleans East]. We have tents and people in chairs. We have so many volunteers who bring water and bring breakfast. We’re normally there from about 4:30AM to about 11:30.

If you want to continue to support us, then you can go to our Cash App, we have a Venmo that’s been publicized on both Facebook and Instagram. We also have a GoFundMe account - that’s been posted pretty much everywhere. And just know that when you donate money, it’s not going to me personally. It’s going to each and every one of the people who are actively on strike and are not receiving a paycheck. This pays them weekly, it keeps their lights on, it keeps them functioning. So when you donate to that, you are literally donating to the life of the people who are asking and imploring the city for better.

As of today, June 16th, the sanitation workers are still on strike. You can find links to support financially or sign the petition here as well. Also of note: Metro has brought in work-release inmates from a detention center to temporarily replace the striking workers, contracted through the Livingston Parish Sheriff's Office and private company Lock5 LLC. During a time when many are calling for police and prison abolition, Metro is using prison labor to pick up trash in New Orleans instead of providing better conditions for workers. [Source]