On Finding Beauty in the Simple 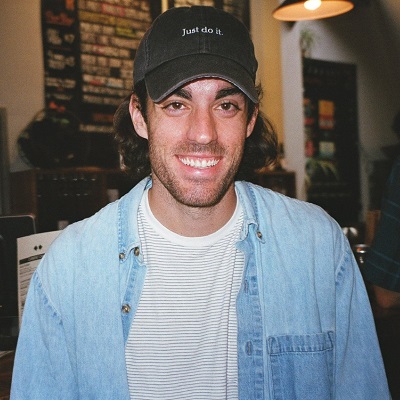 <em>Leo is the creator of Peach Baskets, an <a href="https://www.instagram.com/peachbaskets/">Instagram</a> account and photo collection of basketball hoops from all around the world.</em>

One of the reasons why I wanted to talk to you was Peach Baskets. I read the book and loved it, and I feel like it’s a project that’s closely aligned with Place/Love. I’d love to start by just asking, what was the story behind that? How did it start?

I’ve always just been drawn to basketball. When I was a sophomore in college, or maybe a junior, there was a writing class that I was in, and we had to write a first-person perspective type of piece, about anything really. And I chose to write about our old basketball hoop that’s been in our driveway forever, and I just felt so happy and proud of how it turned out. The story that it told was my personal story, but I realized that everyone has their own hoop, whether or not you were a basketball player. Especially in America - you go around the country, and more often than not, there are rims hanging ten feet above the ground in driveways all across the United States. Which I had been thinking of as a project of mine for a few years, but I’m not a photographer so I was putting it off. I didn’t have a camera and all these things. And then just kind of serendipitously I came across this old used camera from a retired photographer who wanted to sell it to me. I said, “Okay, this might be some sort of sign for me to do this,” because I was thinking of driving across the country anyway. So I was like, alright, I’ll buy a car, I’ll buy this camera, I’ll do it for three months and look out for hoops along the way. So I kind of taught myself how to take pictures and tell stories through that. And that’s how it began.

How did the traveling element come into it - was traveling something you already wanted to do?

The traveling was something that I kind of fell into because I was working with a company and I fell into a remote job, and I was pretty sick of the work itself. I was ready to quit, and then I realized that there was this Remote Year thing, which is a program that facilitates remote work throughout the world. So I applied and I got in. I was like, okay, I can use this job that I don’t necessarily like to do stuff that I do like and that I am passionate about, which was traveling and giving up what I’m comfortable with and going on an adventure of some sort. That was 2017 into 2018. I got back and I still had the adventure bug and I realized that I’ve seen a lot of the world but I hadn’t seen much of the U.S. So the project was kind of a perfect marriage of two of my passions, which are basketball and adventure-taking, with some writing in between which I like as well. It’s kind of a mixture of a lot of things that I’m pretty passionate about, which has been cool to pursue and kind of make my own mark.

Heck yeah. One of the big things I think a lot about and am trying to imbue in this project is noticing the small things about Places. And one of the reasons that I love Peach Baskets so much is that to me those photos really embody that. So I’d love to ask: what did you notice on these travels, or through doing this project?

With hoops, I love when people are drawn to it who aren’t necessarily basketball fans, because I think it gets at more of the human element of the sport. I’ve tried to get away from the business aspect of it, where it’s like millions and millions of dollars. Basketball is great as a business but it’s also a beautiful, beautiful thing that brings people together. Every time I saw a hoop at someone’s house I’d go up and knock on their door and ask if I could take a picture of it. More often than not, they’d be like, “Why do you want to take a picture of that?” And I’d be like, “I don’t know, I just like the story that it tells, and especially the old battered ones.” They’d be like, “Really? Who are you? Why are you doing this?” I’d be like, “Sorry. If you don’t want to, that's fine.” I needed to be in the mindset of: Wow, this really does tell so many stories of who it’s seen under that hoop and the storms that it’s been through. I feel like it’s something that we walk by and don’t necessarily look at everyday, but a staple or a keystone in your yard or in your family that you don’t necessarily consider. It’s a simple thing that is beautiful in its own right.

That’s amazing. I really like what you said in there about basketball and hoops as a beautiful thing that brings people together. Another thing I’ve really been thinking a lot about is communities, and how we can use projects like Peach Baskets to reimagine what our communities can be and how to bring them together. Do you have any thoughts in that vein, whether it relates to basketball or this project specifically?

I’ve never thought of myself as a creative person or an artist, but the more I do stuff like this I’m inspired by little things, small artistic projects that you want to bring into the world. Which builds community in and of itself. For my project, I just started taking pictures of basketball hoops that I liked, and started sharing it, and people started to be drawn to it. It’s very small - I think I have a thousand or so followers on Instagram. But that is a community and people have been sending stuff to me of hoops that they’ve seen around their community that they’re starting to notice, and they may not have noticed before. Which I think is kind of what I was trying to get at: there are these things around us that tell stories, and we don’t necessarily look at them all that often. It could be a hoop, it could be a tree, it could be whatever you want it to be. But there are a lot of stories around us that aren’t noticed or aren’t really told, and I think that’s a lot of what we are as humans and what we’ve evolved to be as storytellers. I’m not a great storyteller like person to person. I’m horrible at telling you something that happened to me. I can’t do it well. So the way I’m choosing to tell stories is through pictures, and some written down words.

In terms of community-building: For me, growing up in Scranton, Pennsylvania, basketball has always been huge. It was always the sport. And so for me that would be my way of hopefully giving back to the community, through an artistic endeavor. I’d love to do a Scranton-themed Peach Baskets thing. And with future projects, I’d love to partner with a non-profit or a school or something that would build hoops in places where there should be hoops: low-income schools and stuff like that. In Scranton, people don’t really think of it so much as an up-and-coming city, but I think there’s so much potential in it, and it used to be this great place back in the early 1900’s. It was the place to be. But since then, since coal has gone downhill, people just kind of laugh at it. There are so many talented and creative people here that I would like to, in the next few decades, make Scranton back up to be the place that it used to be. And I know that it can be. Because there are great people here and I think that’s what makes a place great and beautiful and worth coming to: the people. So whatever I can do in the future to make Scranton a little better than it is now, I would hope to through this project.

I really liked what you just said about noticing the things around us that tell stories that we don’t always stop to appreciate or stop to notice. Why is that important? Why is it important to bring some of those often not-noticed stories to the forefront?

Yeah that’s a good question. I don’t know if I really know the answer to it. For me, I’ve been drawn to - even before I started taking pictures or anything - if I see an abandoned house in the woods, I’m like: Whoa, what was there? Somebody used to live there but they’ve since left and no one’s been there. What happened in that place and why is it abandoned? It’s just simple things and abandoned places have always for me brought up unanswered questions. And I don’t think it’s about answering those questions. It’s about spreading the thought of them or the stories that they might be telling to people. I find a lot, and I’ve been trying to more intentionally, find beauty and meaning in simple things. I started reading this Brian Doyle book - he has these beautiful short essays about the simplest little things but he brings so much texture and life into. Something about good art - well thought-out and well-written or expressed art really stops me and makes me think, and I write it down. I have a running sheet of stuff that I’ve read that I just love, and write it down and return to if I can, if I need some sort of inspiration. So yeah, just finding beauty in the simple is something I’ve always been drawn to, but recently been intentional about acting on or really thinking about.

I love that. Finding beauty in the simple. In the piece that I wrote for the blog, I tried to frame the whole thing around reading Mary Oliver, who is someone that I really appreciate for that exact reason. I’m always really stunned at the way she describes the simple things that are out in the world and in nature. It really inspires me, like damn, I want to have that close of an eye or appreciate things that closely.

Yeah, because we’re here. We might as well appreciate this thing that we’re living through. There are so many beautiful, simple things that go right outside this window that we just don’t necessarily consider. But there are great poets and artists who do, and open our eyes, which is beautiful.

Questions for Reflection: What are the often-unnoticed objects or people in your surroundings or in your community? What stories do they have to tell, and why is it worth listening?

As always, feel free to send your thoughts to placeloveproject@gmail.com. You can sign up for our weekly mailing list by clicking here - this is the best way to keep up with new Place/Love interviews, essays, and more!