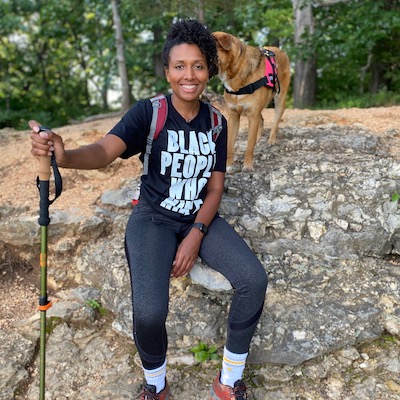 <em>Debbie is the creator of <a href="https://blackpeoplewhohike.com/">BlackPeopleWhoHike</a>, a community seeking to inspire people of color to step outside of their comfort zones and get active outside. Their <a href="https://www.instagram.com/blackpeoplewhohike/">Instagram</a> page posts and promotes images of Black people in the outdoors, with the goal of exposing and normalizing hiking and other outdoor recreation activities.</em>

I know a lot of times people think - I know I did - Saint Louis, you’re in the Midwest, there aren’t cool hiking spots. You’re not in the mountains. But we kind of changed that perspective. We use the AllTrails app and search, and there are tons and tons of trails. Castlewood State Park is one of the more mainstream parks around, but it still has a lot to offer. Some of my other ones are Pere Marquette State Park and Salt Lick Point. With the summer though it’s super super hot here, so we’ve been trying to incorporate water. We’ve been kayaking a lot this summer, which is usually about a one or two hour drive outside Saint Louis.

Amazing. And why are you personally drawn to outdoor spaces? How are they lifegiving for you?

Even this morning, I woke up a little drained and was like, I gotta get outside today. I went on my first hike last year in the middle of August, and at the time I had been working six days a week and it’s just a lot. I needed an outlet, and I didn’t realize that hiking was going to be that for me. When I was out there, it was super therapeutic, it was super relaxing. I felt like I was able to disconnect from everything else going on and reset. And it definitely helps with anxiety. I used to get seasonal depression, and I don’t anymore. Within the group, BlackPeopleWhoHike, a lot of our members are also dealing with anxiety and depression. Nature’s helped them cope as well. It’s really been a creative outlet too. Every week that I go out there I get more and more creative and more and more in tune with myself and nature.

That’s a perfect segue. I’d love to hear more about BlackPeopleWhoHike: how it started, and what purpose it serves?

It started shortly after my first hike, when I realized there was a huge lack of representation of Black people in outdoor spaces. I didn’t personally know anyone who hiked. Even when I’d try to invite my friends out, they wouldn’t return my text messages or calls! So when I started going out and realized how relaxing it was and how therapeutic it was, I was like: there needs to be more people out there. I started it literally off of Instagram, and I envisioned that it was going to be a movement. We’re going to get Black people, we’re going to get them outside, we’re going to get them active. It started off with just me and one other person hiking, and then the next week it was one other person, and then it just slowly grew. I’d have complete strangers join us off Instagram, and come out and hike with us. Here we are coming up on a year, and I’d say 60-70% of the people that have joined us have been completely brand new to hiking.

I believe that one of the big barriers for Black people in outdoor spaces is lack of exposure, and I think we’ve done a really great job of doing that. Something different that we brought was showcasing photos and videos. Because when you’re out, who’s taking photos and videos? Usually you’re out there to focus. But me, I had this vision, so I was taking photos. I just felt like I had the obligation to document what was going on. People were able to see, this looks fun, this looks cool. Now with the Black Lives Matter movement, these companies in the outdoor space, which typically have been 99% white, are now trying to see what they can do to change that space. We need to see Black people in the media, we need to see Black people on their brands, on their marketing material. What I envision for BlackPeopleWhoHike is to expose Black people to the outdoors, to be a resource for them where they can go to get training, a safe space where they can feel comfortable, and find a community that they can join to get out with!

That’s so awesome. I know you mentioned that lack of exposure is a big barrier - could you talk a little bit more about the accessibility of outdoor spaces?

So I actually have five barriers that I’ve thought a lot about. One is lack of exposure, another is lack of knowledge, lack of a safe space, feeling like we don’t belong, and lack of resources. So I think when you talk about not having accessibility, that goes hand-in-hand with lack of resources. I was blessed to grow up in a wooded neighborhood. There were no girls in the neighborhood, so I played outside with the boys. When I got older I lost that, and it took me until my thirties to get reconnected with that. But typically speaking, a lot of Black people don’t have access to that growing up. When you look at a lot of the urban areas, they might not have any green spaces within their community. Do they have access to a car to drive one or two hours out of town to access those trails? Do they even know anyone that does those types of activities? How are they going to find themselves outside in nature? If their family’s not doing it, if their friends aren’t doing it, then it’s this unknown thing to them. And I hate that they think it’s this white thing, that it’s this white thing to do. Simply because they’re unknowledgeable about it, and they don’t know anyone else that’s done it.

There are definitely barriers. Recently there have been a lot of conversations around systemic issues that have kept Black people away from the outdoors. And I think there’s a lot involved. To be honest, I think it even goes back farther to why aren’t Black people comfortable in those spaces? In our hike on Sunday, I was talking to this gentleman and he said something that was very profound. He said, “No, we’ve been in this space. Black people have been hiking, they’ve been fishing and hunting and all this stuff. It’s just that we got to the point that we were scared to be out there. We were driven away.” Obviously I’m talking about slavery times, but if they were caught out in the woods they would get lynched. We used to spend time outdoors and we’ve gotten so far away from it, and now we just have to get people back to it.

That’s such a great answer, and a lot to think about. I’m thinking right now about the erasure of those histories. I think very similarly to how a lot of outdoor spaces erase the indigenous histories that exist there. You’re right - there is a long history of Black people in those spaces as well.

It’s not a history that’s told either. Even the indigenous land, it’s not something that’s commonly told. If you were to go to any trail in any park, there has to be some history there of indigenous land. That’s actually something that I want to get pushed through with BlackPeopleWhoHike. I think every park should recognize that this was the land of indigenous people. It’s only the right thing to do. And I think as a Black person, if I’m new to the space and I come out and I see a sign that this tribe or people were here, I think that I would then feel more comfortable to be in that space.

Questions for Reflection: What safe spaces allow you to step outside of your comfort zone and try new things? If you engage with outdoor spaces and recreation, how will that engagement change after reading this interview?

Feel free to send any of your thoughts to placeloveproject@gmail.com. You can also sign up for our weekly mailing list by clicking here - this is the best way to keep up with new Place/Love interviews, essays, and more!