On Breakfast Carts and Livelihoods 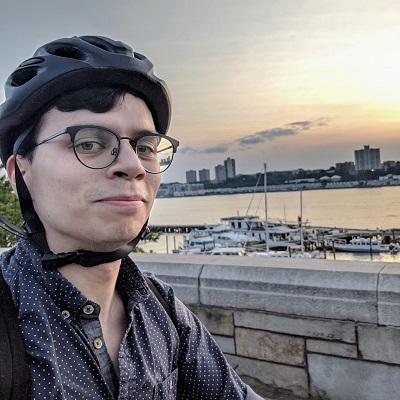 <em>John is a life-long resident of New York City, and know it as well as just about anybody (for him, it’s a labor of love). We met for this interview at a tiny Dominican restaurant called Lali at 10th Avenue and 57th Street, where bodegas and holes-in-the-wall still rule, but are threatened by the luxury housing retail mega-development Hudson Yards, just ten blocks away.</em>

You wanna talk about where I want to be? More and more, especially coming to visit you and the whole apartment up on Arden, I love Inwood. I had never known that neighborhood except to go to the cloisters or fort tryon park maybe once every couple of years. But I had never walked around like Dyckman street or stuff like that, and I love it so much. It’s different as a man, because I can walk around freely at night and just enjoy the scene and everybody partying and clubs going on, people just smoking and playing dice in the street. But I do, it’s got character, it’s got flavor. People are out and want to be there and know their neighbors and stuff like that. It was kind of like that in Queens and I look back and I’m like, wait a second, I know everybody in my apartment building and there were familiar faces out on the block I would see. And I knew them, they knew me, and we didn’t know each other’s names but we would always say hi. You know, there was this one guy who said say hi to your dad for me. I had no idea who he was but every time I saw him on the block walking home from high school or something, say hi to your dad for me. If I knew who you were I would, but right now I’m just going to tell my dad some guy said hi to you. Where I live now, especially at the Northwestern tip of Hell’s Kitchen - it’s not even Hell’s Kitchen, it’s some weird Midtown West.

It’s the only place I’ve ever been in Manhattan that has car dealerships.

Yeah, there’s a gas station, there’s car dealerships, like what is this? There’s no storefronts. I use the word sanitized a lot, like it’s really just sanitized. People don’t spend time there. Like you live there in the apartments, you order your Uber eats, and you never go far from your block. And it’s kind of just sad, you know? Even two blocks eastward, when I was on 54th and 9th, I really liked that apartment because I could walk down the block, I was on 9th Avenue and boom boom boom everybody’s out. And that still didn’t really have a neighborhood-y feel. When I came up to Inwood the first couple times I was like, holy cow, it’s 3AM but people are still out with their families, they got their picnic chairs set up, they got kids running around. Do people sleep? This is so cool.

Yeah. And Inwood’s cool too because it has both the nightclub scene but then it also has the part across Broadway with the nicer apartment buildings. And that has a real community feel too. I feel like it’s a community of people who just decided that this was the place...

And they never left! They built up their neighborhood around them. As opposed to out here, where I live now, the neighborhood was built for people by developers, wasn’t built by the people that lived here. Nobody knew they wanted to live here until somebody put up a building and said, “Hey, you want to live here.” That’s what Hudson Yards is! It’s inorganic, and it really makes you feel kind of like... not out of place, but there’s no sense of belonging. There’s nothing I owe to this neighborhood, and it’s not doing anything for me except making me crane my neck. I don’t know any of my neighbors. I only know my doormen in my building.

No sense of ownership, I guess?

Yeah. I don’t feel any sort of that responsibility to the neighborhood. There’s nothing to gain by me trying to put myself into something to make it better, you know? There’s a couple community gardens that I’ve wanted to volunteer at, or spend a little time at. And there’s a really nice dog park a few blocks away. Which I really do like that place. There’s the dog park and then there’s a softball field next door to it, where I would play intramural softball a lot.

Actually, when you mentioned community gardens that kind of gets to another thing I’m curious to ask about. What are some average, everyday ways that you feel like you can give back to the places that you live in or enjoy?

Breakfast carts. I think they keep the city running in the mornings. And if I find a good breakfast cart or a good deli around the neighborhood, I’m gonna patronize the shit out of it. I’m gonna go there all the time. If somebody comes to visit and is like let’s get breakfast, I’m like yeah let’s go to this one bodega on 56th and 9th where I know the guy and he knows me. Anytime I see him I’m like, “When were you last in Mexico City?” He’s like, “Ah, six months ago. It’s very dangerous.” Every time he tells me it’s very dangerous, don’t go. I’m like, okay thanks, won’t go! And then I get my bacon, egg, and cheese and walk out. And we’re getting into that social contract - or the logical extension of the social contract where if you like something about your neighborhood, support it. Over-support it. Like this place [Lali]. I came here last week, I got breakfast, and I was really grateful for it. I was like, wow, there’s no place to get a really quick breakfast thing on the go, a little cup of coffee for under like seven dollars, you know? So the lady behind the counter gives me the chicken pasteles, she gives me a cup of coffee and it’s four bucks and I tip her the extra dollar cause I’m like, I need to support this. Like the breakfast carts, I’ll always be tipping the guy like fifty cents, a dollar every day because it’s cheaper than anything else I’d get in the area, and so I’d already be paying that dollar anyway. May as well go to you. And I want you to stay. I need you around, please.

Yeah, the businesses, the ventures. I could talk about picking up litter or something, or tending to a community garden, but that’s not how I inhabit the spaces that I’ve lived in. I’ve always lived in a very dense urban environment, where there’s stores. Those are peoples’ livelihoods, these stores. So if you want to show support for people’s livelihoods and keep a neighborhood the character you want it to be, you support stores, restaurants. And I love food, so I’m always down to eat, and I’m always down to spend a little extra on food...

This love of food happens to be something that John and I share, so from here the interview mostly devolved into talking about that. We disagreed on the maximum price that a slice of pizza should cost (I am willing to accept $2.50, John is irked by anything above $2). We chatted about halal carts, and the best places to eat in Sunnyside (John’s recommendation: La Pollera de Mario on Greenpoint Ave.).

The essentials of Placemaking are not only to share what should be sought out in a neighborhood, and imagining what a Place could be. It also includes pondering the application, or how to achieve it, like John’s quest to support the establishments he’d like to see more of. I invite you to engage in a bit of Placemaking yourself: what is it that you like about a neighborhood, and how can you be part of that change?

Feel free to send your thoughts to placeloveproject@gmail.com. And you can sign up for our weekly mailing list by clicking here - this is the best way to keep up with new Place/Love interviews, essays, and more.